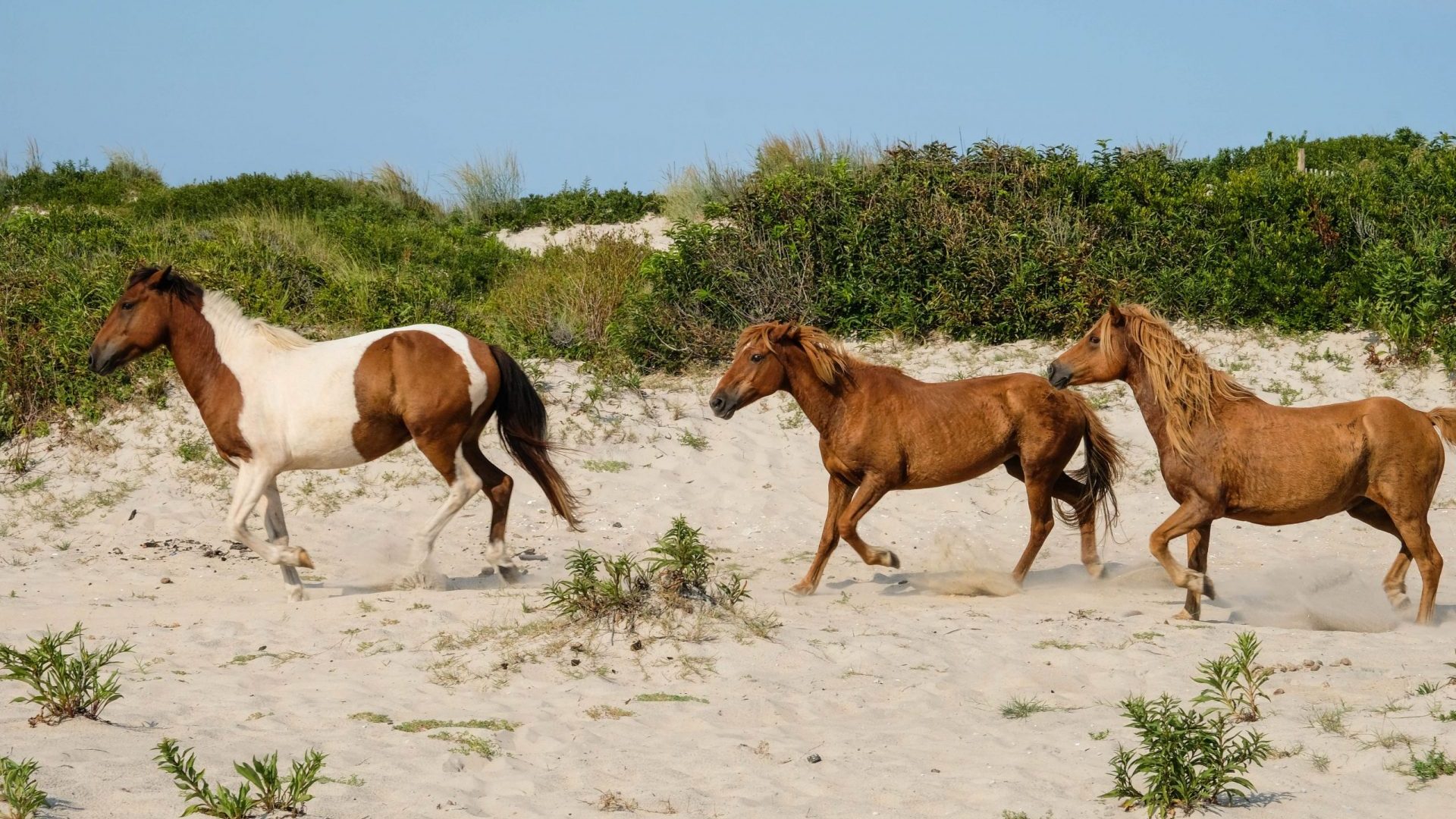 Assateague Island is a beautiful place to visit. It’s well-known for its wild ponies, and it’s a great spot for nature lovers. If you’re looking for someplace to buy a vacation home near Ocean City, the Assateague Island area should definitely be on your list!

The 37-mile long barrier island on the Atlantic Ocean is near the mainland of Maryland and Virginia. The barrier island is largely sand formed by waves and longshore winds. The island is about 8 miles south of Ocean City, Maryland. Assateague Island National Seashore encompasses the entire island south of Maryland’s Assateague State Park and is co-managed by the United States Park Service and the United States Fish and Wildlife Service.

The island is most famous for its feral ponies which live on the island and in the surrounding waters. These horses are probably the descendants of domesticated animals stranded on the island during a shipwreck in the 16th or 17th century. The horses have become an iconic symbol of the island and are a popular tourist attraction.

The Eastern Coast of the United States is well known for its barrier islands. These islands are coastal landforms that are parallel to the mainland and separated from it by a body of water such as a bay, lagoon, sound, or ocean. They form when sand and silt from the mainland settle by rivers and wind in front of the landmass. The islands are constantly changing and often erode away completely.

The Outer Banks of North Carolina is a famous example of a barrier island chain. Other notable barrier islands on the East Coast include Assateague Island (Maryland and Virginia), Cape Cod (Massachusetts), Fire Island (New York), and Jekyll Island (Georgia).

What is the difference between Assateague State Park and Assateague National Seashore?

Maryland runs the state park and the federal government runs the national park. 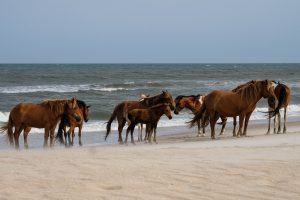 The state park is Maryland’s only ocean park. The park includes a beach, bike paths, a marina and boat launch, nature programs, nature trails, and camping facilities. Foods are available for purchase for sale during the season.

The park opens from 7:00 AM through Sunset.

The day-use admission fee during high season, from Memorial Day Weekend through Labor Day is $5.00 per person.

For the rest of the year, admission is $5.00 per vehicle. 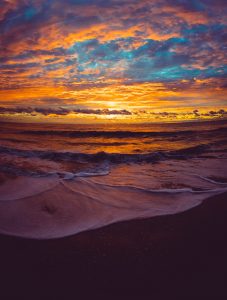 The Maryland side of the National Park opens year-round, 24 hours a day.

Entrance by foot or bicycle is free. 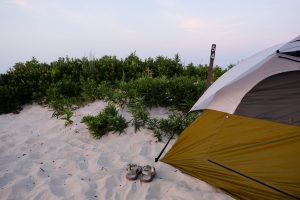 All campgrounds have their sites on the Maryland shore of the park. You may choose a beachside campground west of the dunes. A beachside campsite offers better views of wetlands and grazing horses. There are several backcountry camping sites available, with 4 bayside campsites accessible via walk, paddle, or kayak. 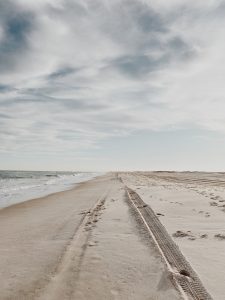 If you’re looking for a place to drive your over-sand vehicle on Maryland’s Eastern Shore, try Assateague Island National Seashore. Designated areas are for vehicles, and you must stay in those areas.

Along with over-sand vehicle permits, vehicles must have all the equipment required to drive in the OSV area. This includes:

If you get stuck in the sand driving on the beach, you will need the equipment listed above to help get your vehicle free. Being stranded on the beach for a while until a tow truck arrives is no fun!

The Wild Ponies of Assateague 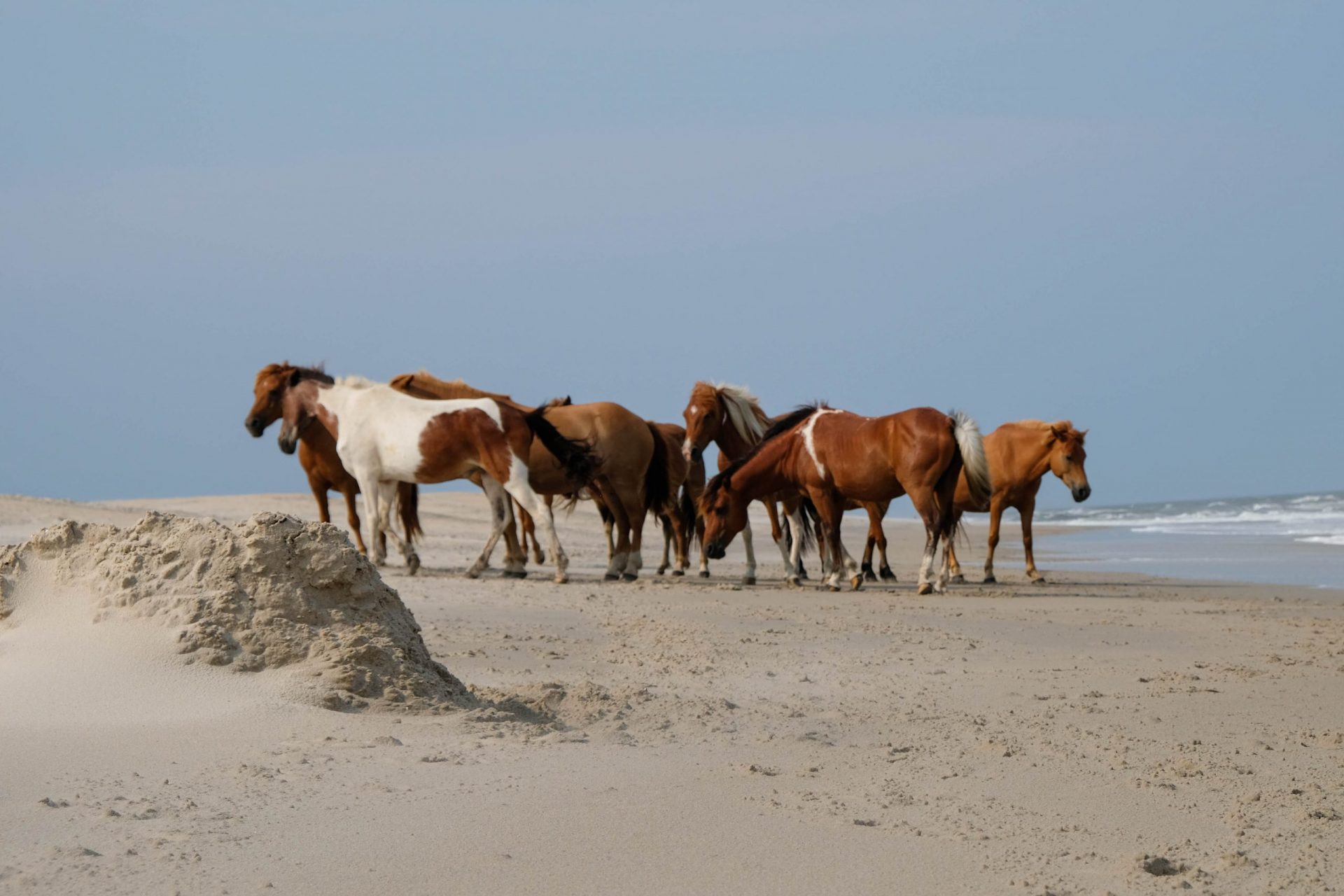 The story says the Spanish explorers sailing this part of the coast had a shipwreck and some of the Spanish ponies came to the islands of Assateague. The English settlers started owning the ponies and it became a tradition to swim the horses over to Chincoteague Island where they could be sold at auction.

The first written record of the wild horses on Assateague Island was in 1887.

Today, there are about 300 living on Assateague. The National Park Service manages the Maryland horses.

Many people visit Assateague to see the wild ponies. The best time to see them is early morning or early evening when they are most active.

History Of Assateague Island, The Pony Swim, And Pony Penning

The history of Assateague Island is a long and interesting one. The island area has been inhabited by humans for thousands of years and has played a role in many significant events throughout history. The most famous event associated with the island is the annual Pony Swim and Pony Penning, which takes place every July.

The Pony Swim is the process of moving the wild ponies from Assateague Island to Chincoteague Island and has been taking place for over a hundred years. Organized by the Chincoteague Volunteer Fire Company, and all proceeds from the event go towards funding the fire company.

Pony Penning is the process of rounding up the feral horses on Assateague Island and bringing them to Chincoteague Island for auction. The event is held every year on the last Wednesday in July.

The ponies brought to Chincoteague Island are sold at auction. The event is a major tourist attraction, and many people travel from all over the world to attend. 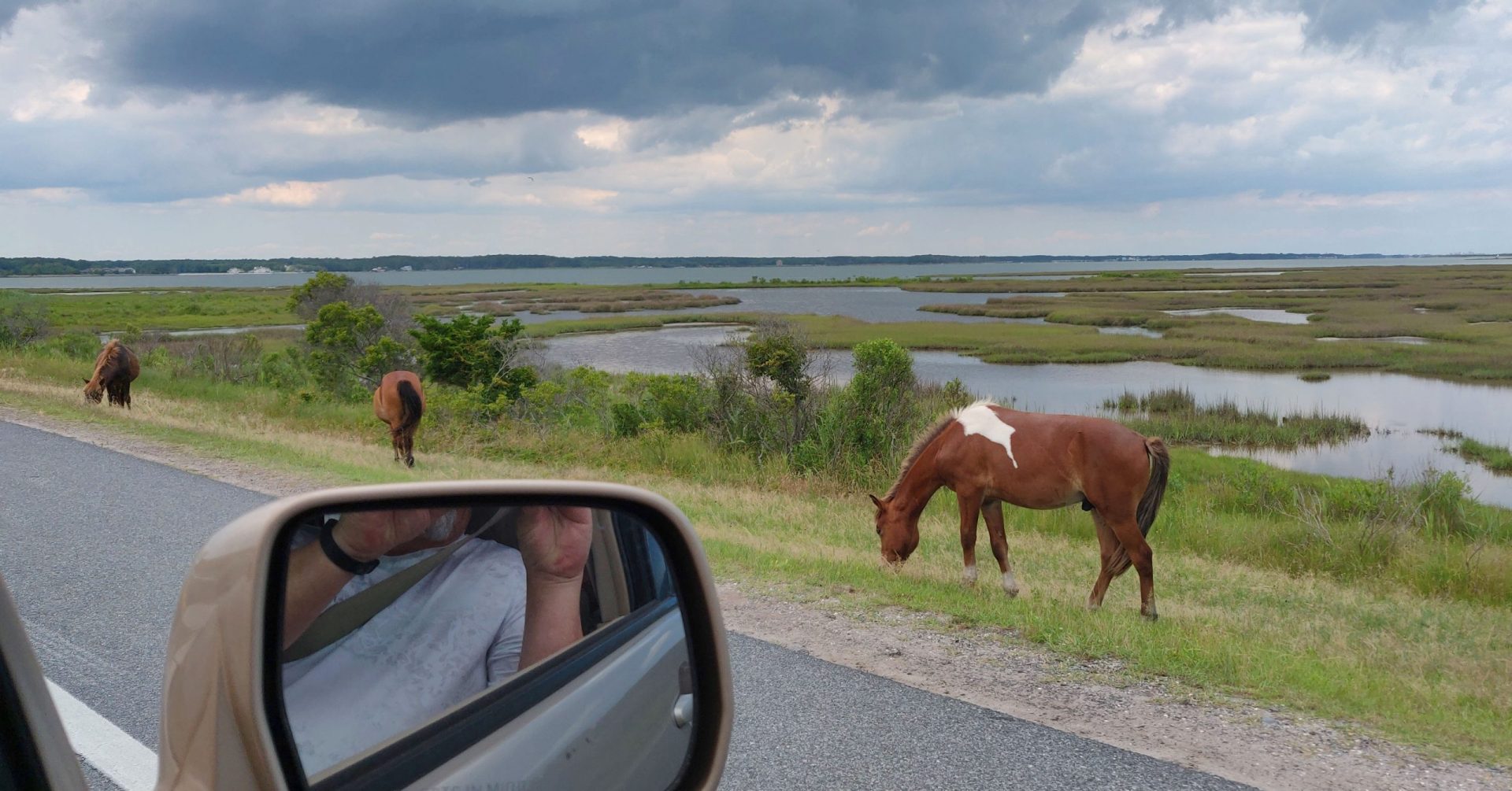 Wild horses occupied Assateague Island since the 17th century. These small stocky wild horses have been adapting to their environments over the years as they eat the grasses and marshes of dune and pond. While they appear tame, they remain wild, and parks are warning the public against feeding and petting them.

You can see these wild horses year-round on the island. They are a protected species. Don’t disturb them.

You can often see them from your car as well as are viewing areas located throughout the island. Stay on the designated paths. It is important to remember that these ponies are still wild. For your own safety, don’t approach them.

Do not approach the horses

While the horses might be a bit timid they have often attacked park visitors. Rangers will issue tickets if you get too near the animals. Park rangers suggest using binoculars or a telephoto lens on a camera to get a good view. 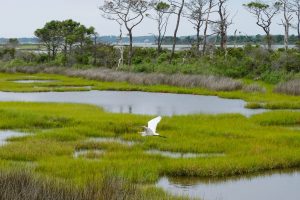 Located along the Atlantic Flyway, it has many bird species during the annual migration.

The Atlantic Flyway is important for waterfowl because it is a major route for birds traveling between North America and South America. The flyway passes through many important birding hotspots, and the wetlands of Assateague Island are a crucial stopover point for many species.

There are many reasons why waterfowl birds migrate. Some of the most important reasons include:

Many different types of birds can be found on the Atlantic flyway, including ducks, geese, and swans.

How To Get To Assateague Island?

Assateague Island is a barrier island extending about 37 miles but not exceeding 1 mile in width. This island is among the most diverse natural barrier islands in the Middle Atlantic region.

It is about three hours away from Richmond, DC, Baltimore, Wilmington, or Philadelphia. The bridges to the island are accessible from Maryland or Virginia. The Visitors Center is directly behind a bridge on the Maryland side.

There are several ways to get around Assateague Island 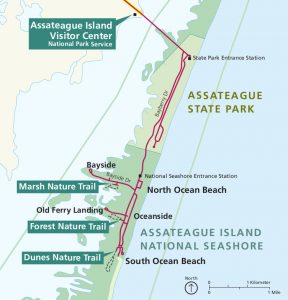 Assateague Island is home to a park headquarters, three hiking trails, and three swimming beaches. You can tour by bicycle. Kayak touring is mainly used in the bays and in the islands for wildlife.

The hiker can choose from 3 routes – none exceeding 2 miles. The trail runs a half-mile along a raised walking trail which offers excellent vistas of the saltwater ecosystem. Half-mile forest trails are an easy stroll on hard paved surfaces or boardwalks and most are covered in woodland. 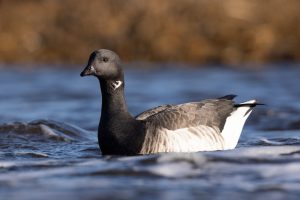 Despite the harsh conditions that occur along the coast, many animals find their niche here. All of the island’s different environmental habitats provide habitat to numerous animal species, such as the sika deer, raccoon, muskrat, opossum, and red fox.

The water surrounding the island teems with animals, including the blue crab several species of fish, and migrating waterfowl.

Are there deer on Assateague Island? 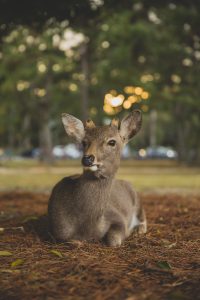 Sika deer can be found on Assateague Island and can be seen grazing in the fields near the visitor’s center.

The sika deer is a species of deer that is mostly found in eastern Asia. They are smaller deer, a type of elk, and are reddish-brown in color. They are also known for their characteristic black and white markings, which make them easily identifiable. Sika deer are opportunistic feeders and will eat just about anything that is available to them. They are also known for being very agile and are able to jump high fences and obstacles. 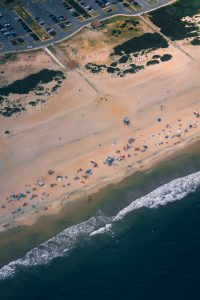 Assateague offers one of the best beaches on the entire Atlantic Coast. During the summer months, swimming and bathing fans flock here. Park spots fill quickly on beach roads so it’s best to arrive early in the day or later in afternoon in the summer.

Collecting shells is a popular activity among beachgoers (1 gallon per person per day). Lifeguard services generally last from 10:00 to 15:00 every day, Memorial Day to Labor Day. A yellow flag marks the guard-protected beach area. 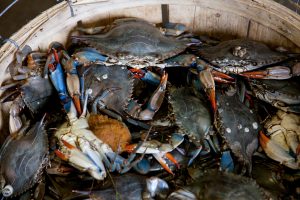 Fisheries crabbing or clamming are popular at Chincoteague National Park and are allowed in designated zones. All supplies are available on Chincoteague Island either from stores or bait & tackle shops. You will need a state fishing license, which can be easily obtained.

Can I drive to Assateague Island?

There are two main driving routes onto Assateague Island. One is on the Maryland side, about 8 miles from Ocean City. The other is on the Virginia side and leads to the Chincoteague National Wildlife Refuge.

Assateague’s north entrance runs from Route 611 to Ocean City, Maryland, eight miles away. The south entrance is on Route 175, a mile east of Chincoteague, Virginia.

You can’t drive between the two entrances onto Assateague Island.

What is the best time of year to visit Assateague Island? 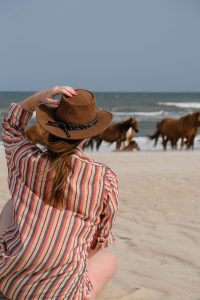 The Ocean Temperatures in Assateagague Island have the same conditions as in Ocean City Maryland, with the best time of year for swimming between June and September. 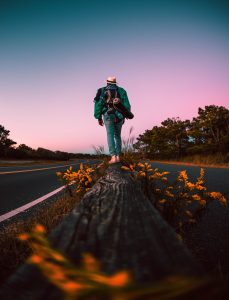 The Chincoteague National Wildlife Refuge was the first of its kind on the Delmarva Peninsula. Founded in 1937 as a refuge and breeding ground for waterfowl. The primary purposes of the refuge are to provide food, shelter, and nesting area for migratory birds and other wildlife; to preserve and protect wetlands and associated uplands, and to provide opportunities for compatible wildlife-oriented recreation.

The refuge is home to a variety of animals, including the iconic Chincoteague ponies, as well as deer, foxes, rabbits, squirrels, and many different birds. There is also a variety of fish in the waters around the refuge, including striped bass, flounder, and crabs. The Chincoteague National Wildlife Refuge is a great place for nature enthusiasts of all ages to explore and learn about the wildlife that calls the Delmarva Peninsula home.

Assateague Island is the perfect spot for a vacation getaway

If you’re looking for a beautiful and serene place to enjoy nature and outdoor recreation, Assateague Island is the perfect spot. With its wide variety of wildlife, including the iconic Chincoteague ponies, as well as miles of beachfront property, there’s something for everyone on this island. Whether you’re interested in fishing, crabbing, clamming, or just relaxing on the beach, Assateague Island is the perfect place to do it. So, what are you waiting for? Start planning your trip today!

About the Author: Wendy Wilmowski 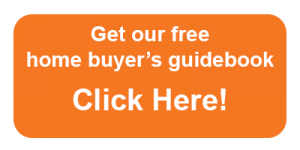